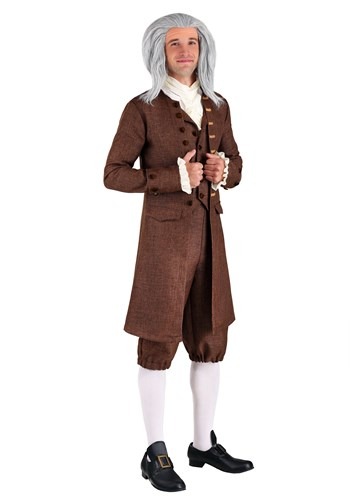 All About the BenjaminBen Franklin was one cool dude. Throughout his lifetime, he did tons of stuff during the early establishment of America and he also created a ton of cool gadgets that many of us use today. He drew the first political cartoon. He figured out lightning and crafted the first lightning rods to protect buildings from storms. He made the first bifocals, which is basically the same design that grandma uses today! He held the title of the first Postmaster General for the United States. And, of course, his crowning achievement? Getting his face on the hundred dollar bill! Every time you get a crisp hundred bucks, you get to look at his face!Well, we wanted to honor the classic historical figure with a costume that lets you look just like Benjamin! This Men's Colonial Benjamin Franklin Costume tries to capture his look from various portraits of him!Design & DetailsCreated by our expert costume designers, this men's costume comes with everything you need to dress like Ben Franklin! The costume starts with a brown jacket that has attached vest panels that fasten with buttons. It also comes with an off-white cravat to help give you that classic colonial look. The pants match the jacket and have elastic in the waist to help provide a comfortable fit. How You Ben?You can continue Benjamin Franklin's amazing legacy by dressing up like him in this classic costume. Bring the whole look together by adding a wig, white knee socks, shoe buckles, and wire-rimmed glasses. Who knows, you might be inspired to invent the next big gadget when you wear it!