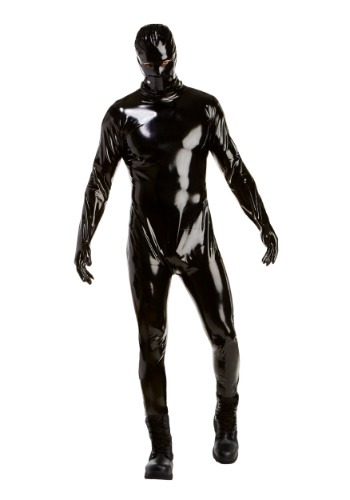 You may have to practice sneaking up on people when you're wearing the iconic Rubber Man suit. It's made from latex so of course it makes high-pitch squeaking sounds with every slight movement. That really makes us wonder.. how did Tate creep up on all of his victims?If you're a fan of American Horror Story, then you are well aware of Tate Langdon's ability to don the suit and creep up on potential victims. However, none of the characters who met the Rubber Man's wrath heard him sneaking up. Poor Chad and Patrick! If only they were paying less attention to the Halloween decorations and more attention to their surroundings, then they could have noticed Tate lurking in the all-latex suit. Of course, we all know that was not the case and Rubber Man AKA Tate claimed two more victims and Murder House added a couple of new residents. We're not sure how Tate's murderous pursuits were always successful because the noisy suit isn't inconspicuous at all, but we assure you, it's the best costume to wear when scaring someone. Your identity will stay completely concealed while you don the infamous all-black get-up. You may have people wondering if you are in fact the evil Tate Langdon underneath the ski mask. Zip up the shiny unitard and add a pair of combat boots to the look, and you'll be prepared to start unveiling your evil intentions. Stand eerily in any doorway to generate gasps and screams. You'll be making Tate very proud!