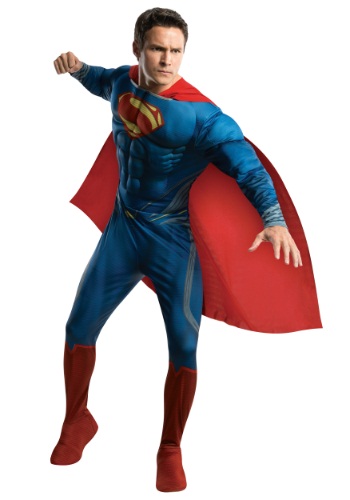 What would you do if you not only discovered that you were actually from a whole different planet, but also that you had amazing superpowers? Well, if you decide to embrace it and become a hero, you get to wear awesome uniforms! When you wear this awesome Superman Deluxe Costume, you'll look just like Supes does in the hit movie Man of Steel!Simply being from the planet Krypton isn't enough to make someone a superhero. For mild mannered Kryptonian Clark Kent, it took an attack on his beloved adopted home world (spoiler: that's Earth) from the sinister General Zod to make him don his red and blue uniform and start kicking some bad guy posterior. But once he got used to the idea of fighting evil, it didn't take him long to earn the trust and respect of his fellow Earthlings. It may have had something to do with him flying around, shooting lasers out of his eyes, and punching holes through buildings, so there's nothing an average human could do to stop Superman, anyway. But, he probably earned their trust, too...This licensed costume is just the thing you'll need to become the hero of your Halloween party! The jumpsuit and attachable cape are designed after Superman's suit from the movie, for authenticity. It even features foam muscles built into the jumpsuit, to give you that "man of steel" physique. Once you decide to become a superhero, though, don't be surprised if the other guests start asking you to open jars and bottles for them. That just comes with the job.