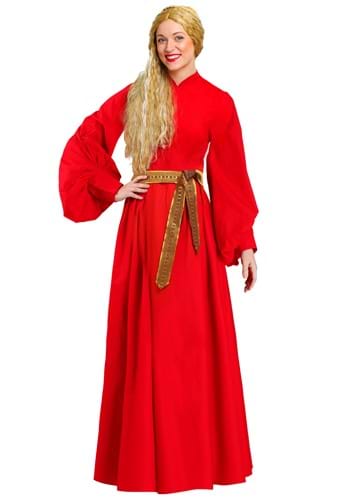 A Quest For Twue WuvUsually women go to great lengths to become a princess...but not Buttercup. She's not sold on the whole idea. Well, if you had to marry a prince named Prince Humperdinck, we don't think you would be too pleased either. That means you would be Princess Humperdinck. Yea....it's a pretty unfortunate name, we get it. Plus, what's the point in getting married if you don't love the person? Besides, Buttercup has already found her one true love... If you're starting on a quest to find your long lost love, then we strongly urge you to dress in this Princess Bride Buttercup costume.Product DetailsYou'll love how this officially licensed costume looks exactly like Buttercup's riding cloak that she wears in the movie. The included belt ties around the waist and cinches the whole storybook inspired look together. You could even top it off with our gorgeous Buttercup wig, complete with dainty crown. Wear the costume and go on a journey to find your very own Man in Black AKA Westley. We have a feeling that he'll take one look at you and say those three magic words you've been dying to hear: "As you wish."Happily Ever AfterIf it's not one hardship then it's another. Still, despite all the drama that the couple had to go through in order to be together, but it was worth it in the end. Plus, they made a few friends along the way. Make this costume a couple's ensemble with our Westley costume or bring it to a whole new level when you invite Fezzik and Inigo Montoya along. You never know when they might come in handy and save the day. After all, there's nothing like friendship paired with true love to ensure a happy ending!